Playmobil characters are made from a plastic material called ABS (acrylonitrile butadiene styrene). ABS is very shock-resistant. It is also of very high quality. It is used in household appliances, in coffee makers but also in motorcycle helmets. It is also present in the bodywork of some cars (for example the Citroën Mehari).
On the toy side, the Lego brand of building bricks has also made it its raw material.

The German brand has not given in to the relocation of the manufacture of their figures and constructions to China. Playmobil makes it a point of honor that 100% of their products are manufactured in Europe. 60% of the manufacturing is done in the Dietenhofen factory in Germany. The rest of the objects produced come from their three other factories located in Spain, Malta and the Czech Republic.

The figurine is composed of the following elements: the round head with its characteristic smile and look, a wig, two articulated arms, two hands, a bust, the legs and finally a part to be inserted between the bust and the legs.

In addition, there are many accessories such as hats, helmets, skirts, etc. with an infinite variety of patterns and colours, creating a unique Playmobil figurine! 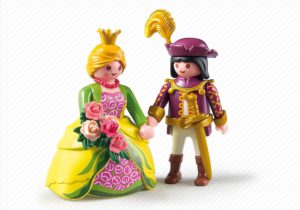 In 2008, Playmobil football players were created with separately articulated legs.

All these together form the figurine that brings a smile to the faces of young and old alike! With the Playmobil character, they can imagine all kinds of adventures!

This site is not associated with PLAYMOBIL®, it is simply a site for enthusiasts of the world of Playmobil knights in which we also offer you to buy a Playmobil castle available on Amazon. To find all the novelties of the famous German toy brand Playmobil go to their official website!