We owe the creation of the Playmobil characters to Hans Beck. In 1970, the creative head of the German metal and plastic toy factory Geobra-Brandstätter imagined toys that would be completely new to children. Thus began the fabulous story of Playmobil!

In 1974, at the Nuremberg Toy Fair, the factory presented three 7.5-centimetre-high plastic figurines with articulated arms (a knight, a worker and an Indian) that were not very popular with the trade. The sales will contradict their opinion since they are very quickly a great success with German children.

By 1974, all Playmobil characters were male. Three themes are proposed with characters and accessories: the Amerindians, the Middle Ages and life on the construction site. The characters are articulated at the level of the head, shoulders and pelvis. Later, the wrists will be articulated.

Female characters wearing mini-skirts point the tip of their nose in 1976. In 1981, the Playmobil family welcomes the children, measuring 5.5 centimetres in height. In 1984, the 3.5 cm babies make their appearance.

The first Playmobils to arrive on the French market were known in the 1970s as Klicky. In 1975, the first building to be built is put on the market. 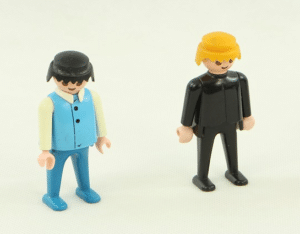 In 1990, the German toy brand took an interest in toddlers by launching the Playmobil 1,2,3 range, which is suitable for children under three years of age.

Over the years, a very large number of themes are proposed by the brand: of course knights, policemen, firemen, pirates, cowboys, the hospital, the Arab world, the 18th century, the Romans, the Belle Epoque, prehistory, the zoo and many more! The themes are renewed every three years. 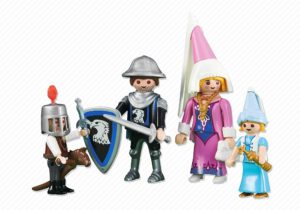 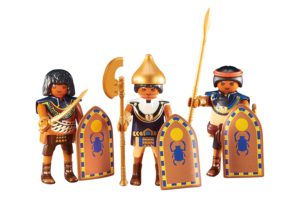 If your child is passionate about a period or a profession, there are bound to be Playmobils that will please him or her! He will be able to make his creativity and imagination work by playing scenes with the brand’s sets and characters. For its fortieth anniversary in 2014, the Playmobil brand reported that it has sold 2.7 billion figurines since its inception. 30 different themes exist. More than 5,100 different characters have been created.

This site is not associated with PLAYMOBIL®, it is simply a site for enthusiasts of the world of Playmobil knights in which we also offer you to buy a Playmobil castle available on Amazon. To find all the novelties of the famous German toy brand Playmobil go to their official website!